In 1938 Orson Welles’ radio show «War of the Worlds» stir among many Americans. In a small town in Indiana, this show led to the massacre. When at night a terrible storm begins, residents think that the Earth was indeed attacked by aliens. People can hide in a shelter in the house of a local rich man, but a place of refuge is limited: only 5 people can be saved. The serious struggle for a place begins. In this situation, all the discontent open, conflicts erupt. Gavin, a worker on a farm, propose a rich man's daughter Kim Shrader, but the father of the bride even does not want to hear that his only daughter will be married to a beggar. Shrader once raised the city, but after that has enslaved all his employees. And here is another conflict: workers do not mind to get rid of a tyrant. Later there is another character, a wounded negro Eli, and Gavin’s father helps him. Others begin to look suspisionly at Eli, and Shrader, guessing that the Negro is associated with gangsters, uses the man in his intrigues. All they want to survive, to save their loved ones and not lose the human face, but doing it will be extremely difficult. «The Broadcast» gets you for the throat from the first page and do not let go until the very end. This is partly melodrama, part crime thriller, but because of the "War of the Worlds" even want to add – partlu science fiction, all ingridients are well mixed. The story reveals the major conflicts of prewar America, social, racial, class. Portrayal of the characters of the book turned out not quite impressive. For example, the daughter of wealthy Shrader is a writer, but we only at the very beginning see how she prints on a typewriter, but otherwise she remains the only daughter of her father. Eric Hobbs makes not the most original story a much more tense by adding a storyline with a black gangster Eli implicated in a double murder near the home of Shrader. Eli enjoys the hospitality and hides in a house together with everyone, but Eli is a hesitant gangster, incapable of meanness. 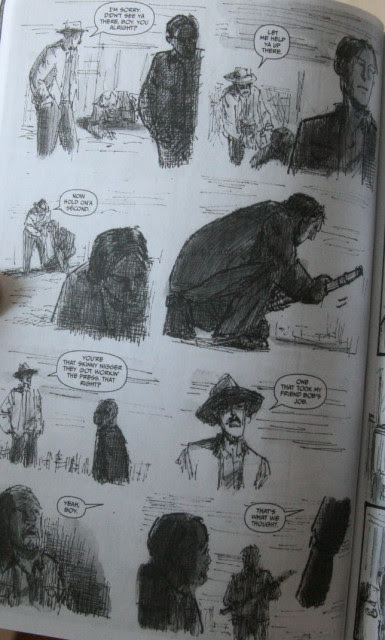 Art of Noel Tuazon is veryfitting to the raging weather. Blurry black-and-white sketches give the impression that the heroes of the book are always in the rain, even when they are indoors. Incompleteness of the picture does thr narrative more emotional, so that you can feel that all participants in this event are very nervious. Nuazon never gives close-ups, keeping the reader at a distance and not doing anyone special: it is not specific Shrader, Gavin, Eli, etc., they are a rich farmer, a rural worker and a gangster as such. Blur of the picture gives to the story surrealistic features.