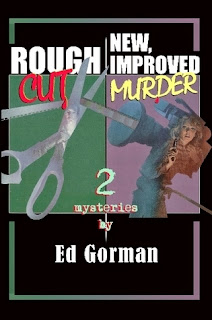 Michael Ketchum is a partner in a small advertising agency. Michael seems to be the only one who really works there, not only looking after the artistic side of the business, but also taking part in the creative process. The other advertisers, starting with Michael’s partner Denny Harris, are preoccupied by different activities: looking for mistresses on the side, stabbing each other in the back, scheming, drinking during working hours, at best, doing nothing.

Michael suspects that his partner Harris keeps the biggest client wife's named Clay Traynor as a mistress. If this secret will emerge, Traynor is likely to stop working with Michael’s firm, and the firm simply will go bankrupt. Michael hires a sleaze private detective to gather evidence on Harris. With photos from a private detective Michael goes to his partner to confront him and put pressure on him. In the Harris’ house the corpse of his partner greets Michael. Michael, scared, doesn’t report crime to the police, and soon someone kills another agency employee and another. Michael must find the killer before Michael will be the next.

After Rough Cut Gorman will write a few dozen books, but in 1985 this will be his debut. The circle of the novel's characters are only employees of an advertising agency, and the action rarely spreads beyond the office and apartment of the protagonist. This makes the mystery local, and the atmosphere stuffy. Everyone is a suspect, and the suspects die one by one. Could the killer be a secretary? The agency employs envious cowards and careerists that even secretaries are not to be excluded.

The intrigue expertly is stretched until the very end, and I can assure you, you will not guess who is a killer.

I also quite enjoyed the novel because of the presence of a bad private detective. If usually private detective is a knight on a white horse, a hard man, walking down the mean streets, and in these cases invariably P.I. is a main protagonist, in this book the private detective Stokes is an aahole, blackmailer and sissy, and not the main character either. I have not seen such disgusting private investigator in a long time.

Gorman’s prose is another pleasant surprise, not rough cut at all, the refined product.

«After my divorce, and before I felt much like falling in love again, I spent many evenings alone in my bachelor apartment feasting on Stouffer's frozen dinners and using self-pity the way other people used drugs. I also got into the habit of approximating a sensory-deprivation tank by sitting in the bathtub, throwing back several gins, and coming dangerously close to dozing off in the hot water.

Which is where I was three-and-a-half hours after somebody knocked me out at Denny Harris's house.»

This is conscious, adult, men's prose, surprisingly assured for the detective genre. Rough Cut is a pleasant debut.