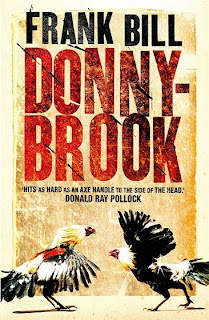 «Donnybrook was a three-day bare-knuckles tournament, held once a year every August. Run by the sadistic and rich-as-fuck Bellmont McGill on a thousand-acre plot out in the sticks. Twenty fighters entered a fence-wire ring. Fought till one man was left standing. Hordes of onlookers-men and women who used drugs and booze, wagered and grilled food-watched the fighting. Two fights Friday. Four Saturday. The six winners fought Sunday for one hundred grand.»

At this tournament on a remote farm, sooner or later the protagonists of the debut novel by Frank Bill will gather to settle things. Someone will come as a fighter, someone as an onlooker, and someone will come here for other reasons.

The main characters of the novel are the fighters, in the sense that they are ready to defend what is theirs and fight for what had been taken away from them. Coincidentally, four of these characters are also bare-knuckles fighters that can compete for the top prize. Jarhead robbed a gun shop to get money for the fee for the tournament, and only wants to feed his family with the money won («I's hungry, Dada») and to cure an ill back of his wife. Angus and his sister Liz before the tournament won’t divide rightfully cooked drugs and will scatter in different directions, Liz in the company of another fighter named Ned, they as a team will sell meth during the tournament. Deputy Sheriff Whalen rushes for Donnybrook to get revenge. A Chinese named Fu will look at the tournament for the people who owe money to his boss.

Each character has its own motivation, everyone arrives at Donnybrook as to some place where the dreames come true, and by the start of the tournament there will be several lives taken by each main character. Personality of these characters should represent the greatest interest to us, because the tournament itself is crumpled, fistfishts remain in the background, and - spoilers - because of general chaos the tournament will be disrupted, and all that remains of it will become a great slaughter.

Actually, the events preceding the tournament, which reveal the nature of the violent people of Southern Indiana, are the best part of the novel. The closer to the finale, the more boring the novel becomes, despite the seemingly appealing knuckle fights. The problem of the book is just that it becomes non-stop action, and that in itself becomes too much and makes too little sense. With each chapter the heroes’ teeth, heads, kidneys and thighs are kicked in, but they ignore all that, and they like zombies crawl to Donnybrook as if there human flesh awaits them. Instead of a play of characters we get a play of rifles and fists, and dialogues’s semantic sense decreases rapidly («Spit and hollered," Fucking-fuck-fuck-fucker! "»). When everyone is fighting with everyone - it's tiring.

In his short stories from his debut collection Frank Bill saw some big picture. Bill created the mythology of his native land. In those stories were mundane wisdom of a person for whom violence was a form of existence. In Donnybrook the author as if destroys his own mythology. No wisdom here but only a scuffle. All is solved by a gun, there is no difference who you are.

Bill makes no attempt to get to the causes of criminal life in Southern Indiana. One of the characters, Purcell, makes superficial conclusions:

«He was honing an edge. Thinking about what he'd read in the newspaper earlier in the day, about wage cuts and unemployment. How companies across the U.S. were in a slump. Some were sinking while others tried to do more with less. The American way had expired, been lost somewhere. Now it seemed to work in the US just meant you were a number trying to make big numbers for the men above you. And if you could not do it, there was another number that could.»

«A deafening blast erupted from the .30-30's barrel. Half the officer's face opened. He stutter-stepped backward, fell out the doorway. His body spread out like a puppy-soiled rug on the porch, wet and spotted.»

Only the style, too, becomes stale in the second half, turning into a parody of itself:

The first half of the novel, one that recalls the best Bill stories claims the real depth, and the second one is smeared with action bordering on self-parody. Perhaps the best is to re-read Bill’s short story collection.