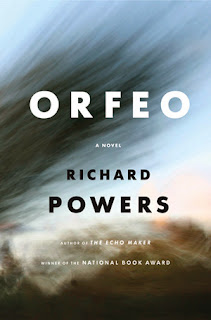 Powers's novel tells the story of an elderly avant-garde composer Peter Els, accused of bioterrorism and on the run. In the novel there are the two intertwined plot lines - present, actually where Els hides from the law, and past, which tells the whole story of the life of the composer and DIY-biologist.

The book events begin in 2011 in the noirish tones. Els, who is well over 70, finds his beloved dog dead, panics, dials 911, hangs up, but the police still checks his call. Patrolmen are puzzled by the cause of Els’call and advise to call Animal Control for the proper disposal of dog, noticing Els’ home office, in which the protagonist keeps his tools, flasks, jars with bacteria.

Police notifies the Joint Security Task Force, and two federal agents, who “looked like counterfeit Jehovah’s Witnesses” pay Else a visit, asking him how he set up his home laboratory, what he's doing, what bacteria he’s working on, and then illegally confiscate his incubator for tests. Els hopes that this will be the end to the inquiries, but the next day, returning from a run, he sees outside his home federal agencies vans, Feds searching his house, and a crowd of journalists. Els decides not to voluntarily give up but run, removing a small amount of cash from ATM machine to no longer use a credit card.

Musical title of the novel fortunately does not imply that the novel should be written in musical language, that is a melodic style, that gurgling and strumming, but leads somewhere to the void. Richard Powers’ Orfeo is not a beanbag, designed for public entertainment. Also true that you will not call this an avant-garde novel, despite the genre direction of the protagonist. Novel in this form is quite accessible to the unsophisticated reader. Each chapter has some kind of epigraph, very odd, but that is the end to the experiments with form.

Melody of the novel lies in a different layer. Powers finds a match of the rythmes between the two plotlines of the novel, the past and present. Like a real drummer, the author makes the elements of past and present equal. They may sound one after another, or simultaneously. These lines are of different timbre, but have the overall goal. The present line has alarming notes with noir overtones. Powers took a real case of a homegrown biochemist for adaptation, although if you do not know the whole story it may seem very much like science fiction. This line is not so deep, but it is the driving force of the story and gives you the opportunity to make the book even more full-bodied. Hysteria and obsession with terrorism are exposed in this novel as things dangerous and unpredictable. Intelligence agencies are engaged not in the search and filtering of real terrorists, but in fact they create their own home-grown criminals out of harmless "scientists" (the same applies to bombs makers) to improve their statistics.

The book raises not only relevant, but also the eternal questions. Els’ story is the story of a mad composer, and doomed genius, anda loner trying to remain in eternity. Man creates music, remains alone, and there is no one around to listen to his music. And if you believe the hero of this novel, the music is written not for someone, but for eternity. But eternity is not near enough, and time passes so long. (“The best music says: you’re immortal. But immortal means today, maybe tomorrow. A year from now, with crazy luck.”)

Everything Powers writes about is authentic, no false notes. Biochemistry and music, it would seem, are things that are not compatible, and it is still unlikely to meet a person who understands both. Powers brilliantly passes the test for the plausibility where the whole situation seems to be unplausible.

In Powers’ favor plays his stylistic choice when describing the music. It is basically a mechanical description, the actual technical descriptive process, without heaps of words around music, with a bunch of adjectives and a small share of sense. The main thing is that this choice works. Reading a novel, you feel the greatness of the music created by the protagonist, and the strangeness of his gift.

Orfeo is dear to mind and heart. And the ears, of course.