A Girl is a Half-Formed Thing 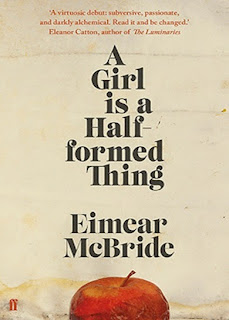 Eimear McBride
A Girl is a Half-Formed Thing

The nameless narrator of this convulsing story begins at age two when her brother went to the surgery to remove a brain tumor. The narrator wakes up in the hospital, he sees her bloodied older brother, tries to tell her mother not let her brother be touched.

A close relationship with her brother largely determines a way of life of the girl from the title, from age two to 20 years. The narrator and her brother were born in a Catholic family, about the father it’s known only from the words of the mother that he had died, their mother is pious and cruel as a Christian woman can be cruel, asking ffrom her children humility before God. As a result, there are the constant punishment, beatings, prayers, blind adherence to the precepts of religion.

The brother after surgery eventually becomes retarded, and with a limp. The surgery for the time being saves him from the consequences of the tumor.

The mother rears her daughter and her brother in the severity and the Catholic faith, even though they both do not know the prayers and do not believe in God at all. Children’s grandfather blames her for bad parenting. She did not even thanked her father for sending money when the boy was ill. Only sometimes the mother shows love for her daughter, for example, comforting the girl after she had a nightmare.

The brother, because of his illness, remains largely untouchable (part of the story is written with the frequent use of "you" as a way of addressing to her brother), the narrator gets all the beatings. Until school time girl remains as if in the shadow of her brother, and during school years the narrator is formed, gradually becoming a separate person and not an appendage of the ill brother.

A Girl is a Half-Formed Thing is anything but convenient, comfortable reading. Moreover, this book is as far as possible from comfortable reading. Hard to imagine a person who in the evening, drinking a mug of tea, rushes to the chair, to enthusiastically read even 10 pages of this novel.

The reason of the caused discomfort lies in form and in content. Stylistically, McBride does not use commas in his novel, and sentences are written so chaotic and convulsive, it will take a long time to find the novel’s rhythm. Even after forty pages there is no adaptation. Each page literally you take by assault. Literally every paragraph requires slow rereading.

McBride uses a narrative technique called stream of consciousness. Streams can be different, coherent and not. This is far from the connectivity and directness. Thoughts of the heroine (and almost everything that happens, happens inside the head of the narrator, the external description is given a minimal amount of text) rush to and fro, stumble, catch up and overtake each other. The heroine seemed to stutter in her mind, sometimes swallowing sentences or pieces of sentences.

Keeping it in mind, the book though doesn’t read as a burden. It reads slowly, but if you really read it, then you catches every word in it. The novel forces the reader to work, with eyes, brain and heart, and if you try to get away from this job, you will not be able to read even a dozen pages. «A Girl is a Half-Formed Thing» is of those books, after which it actually can be said that reading is a hard work.

The story in this book is quite linear (one might even say conservative, as style is experimental). It’s an Irish story of growing up, amid domestic problems, strictly with Catholicism plus heightened sensuality. Again, the reader will not find solace in the story of the lonely girl with the terminally ill brother, a cruel mother and pervert uncle. Realism of A Girl is a Half-Formed Thing is a sharp object penetrating the skin. Reading such prose hurts, not reading probably is even harder.

McBride’s talent lays in that her novel is not an experiment for the sake of the experiment, while reading you are gritting your teeth and congratulating yourself: I'm smart, if I’m reading such intricate prose, - and dreaming for the book to end quickly. This book is a fully formed, finished thing.