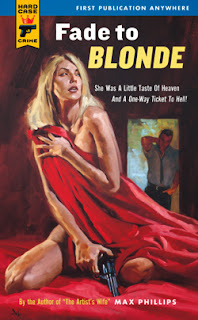 Ray Corson virtually works for free for a local building contractor, and it starts to bother him. Corson came to Hollywood as a screenwriter, but also tried himself in the ring, in front of the camera, and now doing odd jobs. When an attractive blonde finds him and asks to help her with one thing, Corson immediately quits his job, knocking out the payment from his boss.

A blonde named Rebecca LaFontaine (of course, a pseudonym) offers a small sum of money for Corson so he would help her get rid of a persistent suitor Lance Halliday, and for get rid of him the girl means to kill him. Corson is not ready to kill and offers simply to scare Halliday with more peaceful ways. Halliday owns a small film studio, engaged in the production of pornographic films, as well as on the side deals drugs. While Ray is looking for ways to approach Halliday, the dead bodies begin to pile up.

It is not difficult to guess that Phillips wrote an homage to paperback novels from the 50s. The detective hero himself came as if from noir novel (eventually Corson considers killing Halliday and solving all problems), but the novel’s plot here is purely mystery. Phillips plays by the rules, scattering hints and pieces throughout the text, but doing without trickery.

Charm of Fade to Blonde lays not only in the plot and style. The novel reads more like a book from 40s or 50s that has been forgot and only now was found. It is perfect to learn to distinguish the original from the copy. Connoisseurs of old PBO novels will find the whole scenes and the individual words that you can read here, but never could find in the paperbacks of the middle of the last century.

«"You can touch one for a dollar, "she said.

"Give me a dollar," she said, drying her back.

After a moment, I took a dollar from my pocket and handed it to her. She folded it twice and tucked it under the right strap of her suit, then swung my towel around her shoulders like a shawl. Beneath it, she lowered her left strap. She took hold of my right hand, slipped it under the towel, and placed it on her breast. It was heavy and firm. The skin was still cold and goose-pimpled, but I could feel the heat inside.»

This scene gives a particularly good idea of the differences between the two eras. I find it difficult to imagine that such an episode would find a place somewhere in the book of a detective imprint (although we can not exclude softcore publishers).

Fade to Blonde is a clever homage and strong whodunit.