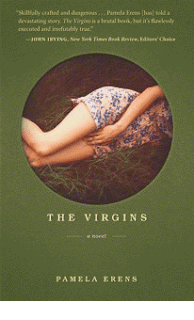 1979, Auburn Academy, one of the best boarding schools on the east coast. There come the main heroes of this book, Aviva and Seung, and Bruce Bennett-Jones, the narrator, a voyeur, a dreamer. He will actively observe a pair of lovers, and most of the action will take place in the mind of the narrator.

Bruce immediately notices Aviva among all the girls coming to Auburn. She is pretty, her appearance emphasizes her sexuality, and Bruce meets her, feeling a certain attraction to Aviva, although later he’ll tell friends that she is not his type. Aviva herself will react to the narrator with restraint: she will talk about her younger brother, who writes her weekly funny letters, about her parents, seemingly successful family in which there is no love. Bruce will try to kiss Aviva, but she won’t succumb.

Aviva chooses another boy, Seung, whose parents immigrated to the U.S. from Korea, a classmate of Bruce in high school in upstate New York. He's tall for Asian, athletic, broad but modest, not too pretty, and because of his origin, feeling second-rate - particularly compared with Aviva.

Shortly after the start of classes Bruce for the second time tries to get closer to Aviva at the boat house. Bruce thinks that fragile Aviva wants sex, and all nearly ends as a rape. Already stripped Aviva rebuffs brazen Bruce, and about this episode, neither he nor she ever will tell a soul.

Seung and Aviva start dating in front of the whole school, making out, kissing, irritating some and delighting others. Pupils find them a strange but almost perfect couple, jealous of their closeness and happiness.

The Virgins is an artful novel. With his plot simplicity, it is not that simple. From a narrative point, here too there is a double bottom. The narrator of the book is always in the background, as if to say: look at this couple here, they are the protagonists, I am just spying. But it's a trick: even though the narrator is not an unreliable narrator in the conventional sense of the term, you’d hardly call him reliable. Bruce saw with his own eyes just what everyone had seen: kissing in public, the arrival of young lovers, a fatal ending. Everything else that happened behind closed doors is only imagination of the narrator, not dirty, on the contrary, quite romantic, accurate, sensitive, catching not body desires but torments of the soul. These kind of torments are Bruce’s own: devoid of pure love, at least he on the example of the others can see what love is. But do not forget that Bruce is not a sympathetic soul, he is a voyeur, envious, lustful creature who is excited about these fantasies - primarily on the failures of others.

His villainy is easy to overlook because he almost did not participant in the events, but in fact he is pure love destroyer, killer of an ideal.

The death of Seung is known already by the middle of the novel, but it will not stop the greedy absorption of the book pages. And if the story is not too original, it is written with feeling, without dipping into erotica.

The novel is written by a woman, but its narrator is a man. And I do not quite believe that Bruce could so accurately convey the feelings of Aviva. The scene in the bus where Aviva feels the excitement of jeans pressure when the bus jumps:

“The bus sends its vibrations through the vinyl banquette seats and into her thighs. She tenses experimentally, shifts position. Her jeans tighten against her crotch. She feels herself contract to a sharp, sparking point.”

or her feelings with Seung in bed - all these fantasies of Pamela Erens herself, but not the narrator’s.

The Virgins, perhaps, will not open new grounds, but it is masterfully written, enjoyable novel.