The Sixth Black Book of Horror 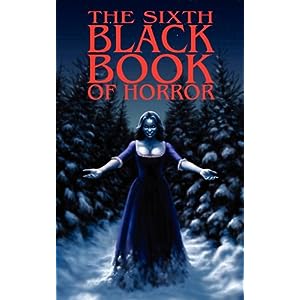 The Sixth Black Book of Horror
Ed. by Charles Black

This anthology, which by its title, which includes the word «black», on the one hand, warns that it is a collection of horror stories, on the other - simply announces that the book was compiled by a man named Black, has the usual suspects, which can be found in any of something worthwhile book of the horror genre, and the names that I see for the first time.

The British have no problems with ideas, but often they tend to overly straightforward horror that has one purpose - to scare a reader. Maybe someone will like it, but not me:, I'm waiting from the story something more ingenious than just talking mannequins, and serial killers, inhabiting bodies of children.
I'm not even going to mention unsuccessful stories, they're really boring and written in a very rustic manner.

First-class stories (or, with the amendment - the first class in the horror genre stories) is four there. «Traffic Stream» by Simon Kurt Unsworth could easily adorn a collection of early Stephen King. The two men agree to meet in the evening to discuss the business case. One is already waiting in the office, and the second is about to drive up. However, he can not find the way to the office and generally seems to be lost. He calls up with a partner, asks him to wait while he unsuccessfully tries to find his way. Unsworth gradually pumps the atmosphere and the horror of the driver passes to the second man. Almost flawless story where no one can help to a man gone to hell. Gary Fry in his «Keeping It in the Family» also describes the madness, but madness of one person, not the madness of the world, like was in Unsworth’s. A married couple with a child decides to go relax for the weekend and take husband's brother. The brother gets along with children and suffers from schizophrenia. Fables and fantasies of madman (he also writes short stories) he tells the boy, are being implemented in reality. In Fry's story, perhaps, Lovecraft’s spirit flies, but nonetheless it is an impressive story.

Most elegantly written stories there are RB Russell’s «An Unconventional Exorcism» and Mark Samuels’ «Keeping Your Mouth Shut». Russell's story has a sort of spoiler in the title, and it spoils the story a little. The story is family history, with spirits, spiritualism, and, indeed, exorcism. In Samuels’, the protagonist is a writer-loser. Rather, even it is hard to name him loser writer: just over a few years of his career he didn’t wrote a short story. The story is more an exercise in style: seemingly lightweight, pseudo mad, but it is, from beginning to end, impossible to put down.

Anthology, I think, killed two birds: here a reader will find stories on their own fans of straight scary horror stories and connoisseurs of fine British horror with a touch of British humor. But it would be quite enough one dead bird.
Автор: Ray Garraty на 1:02 PM