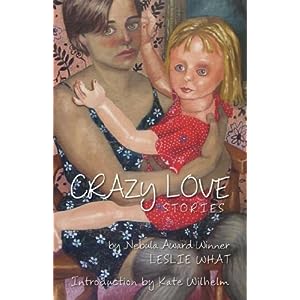 17 stories in the book is the essence of a rich imagination and a rough but compelling language. Each story has a new idea, which more practical and calculating writer could expand to the extent of if not a novel, but long novella for sure. What does not spray her imagination over a wide area, stopping at seemingly narrow space of the human soul (and the body, too), but such self-limitation leads to a striking and far more successful results.

Already in the first story of the collection «Finger Talk», we read a story about two gorillas: one real, with a gift to speak through sign language, and another, a woman who walk almost all the time in a gorilla suit. Gorilla Koko helps to work out personal live of completely entangled woman. Fantastic element there is minimal, and it can be reduced to the imagination of the heroine, but it is enough to electrify the story. In the following, «Babies», at the beginning a woman named Roni Sue washes dishes; she feels uncomfortable, she's pregnant. And further: «The best she could do was remind herself that soon she would be blessed with babies, lots of tiny babies, and the bad parts would all be over.» Why will she have a lot of little kids? - The question is haunted. And soon we learn that the house is inhabited by a lot of cockroaches and people from the office comes in and sprinkles a house. And this story gives a dual interpretation: inside the woman are the larvae, which appeared after pollination with pesticides, or is it just imagination? Throughout the text hints are scattered that predispose most to the first version. But first and foremost it is a story about love: to children, whoever they were. The plot of «Why a Duck» has place on a dirigible. Two ghosts again and again crash, this is why their life is unbearably monotonous. And their love vanishes out of boredom and monotony. And a duck rescues fading feelings. In «Going Vampire» the narrator is a vampire. He works in Hollywood. Selecting the next victim, he seems to be willing to repeat what has made many times, but he sees something special in the new girl. Vampires can not only love, but they have a conscience.

Even less stand-out stories, such as «Frankenfetish», for example, where, after mother's death from cancer, the father and his two sons almost worship the surviving cancer cells, capable to draw not all sort of readers, remain highly penetrating, with a good layer of irony and sometimes dark humor.

And yes, all the stories in the book are really about a crazy love.
Автор: Ray Garraty на 1:41 PM