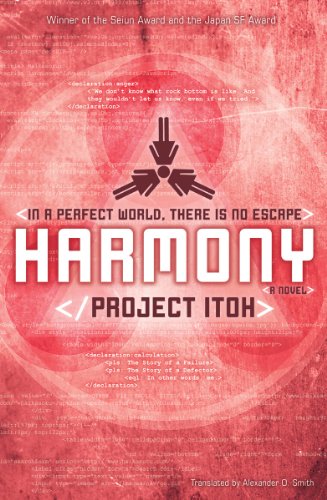 The protagonist of this book, Tuan Kirie, a young girl working in the secret service, begins her story from her childhood. She and two her girlfriends conceive to kill themselves. The leader of this small group of young suicides is another girl, Miach Mihie. She starves herself almost to death, overeats, reads books and knows that once kids died on jungle gyms. In the world of the future everything little Miach does with herself is banned. After the terrible disaster (possibly nuclear) called Maelstrom governments of most countries of the world decide that it is time to put an end to the human deaths and prevent future catastrophes, so they create a global network of governments so-called admedistrations, the main objective and concern of which is human health. Person's life is almost given to society, life becomes main value. Because of the implanted devices overseeing a human life, a person almost never gets old and lives for hundreds of years. Naturally, the device WatchMe make out human diet, which excluded cigarettes, alcohol, fatty foods, spicy foods and anything that might cause any injury. All information is also obtained from the chip set, AR; books are banned as sources of harmful knowledge (respectively, all the books, where people not only kill, but just smoke, may show a bad example and even call to action).

Body does not belong to a man - and Miach hate it. So far she has escape: WatchMe is set only to adults, so you need to have time to kill yourself until adulthood. Persuading friends, Miach invites them all to drink pills and die, it is the only way to prove that the body and life belong to the owner, not the society. Miach dies, but her friends, narrator Tuan and Cian Reikado fear and stay alive.

Tuan still doesn’t like society. Now, as an adult, she works in a special service Nexus, which is engaged in problematic regions (in some regions not all people have WatchMe). Tuan chooses this job because WatchMe can be disabled, that is, quite simply, as another officer says “for the beer and the smokes”. Seemingly dead Miach horrifies - and throws a puzzle to Nexus - whole planet: first, at her command a few thousand people at the same time suicide, and then she puts a condition: to stay alive, every person on Earth must kill another one.

Dreams of utopia will always be spoiled by something - or someone: it is, among other things, that Japanese writer wanted to say in his book. Knowingly troublemaker, endangering the lives of all people in the world, was just a child: in the minds of children the most audacious plans are maturing, kids are almost not constrained by fetters of everyday life; their thinking is not contaminated with stupidity and petty fears. Itoh’s description of children at the beginning of the novel, their conversations, thoughts, are most successful part, with tender voices, despite the fact that the author knows that child fragility and honesty will be over soon. Until the middle the book reads like a fairly well-designed utopia, global, but with Japanese characters, but after the middle the author adds another plotline – detective one. The villain is known, but the main thing is not who?, but why?.

Sometimes the author for deeper describing the world of medical utopia (though it is medical only on the surface), is forced to mark time, so the protagonist sometimes repeats many times that she said in earlier chapters. Itoh’s terse language is consistent with the language of the narrator, Tuan (she in this world she despises cannot talk to anyone properly), what is more, she thinks in the html language, and the whole book is written with such markup:
"< recollection >
I want to dance on the graves of those kind, healthy people.
A waltz, I think.
< / recollection >"

Itoh didn’t quite make out the plot, so the ending rushes headlong, and the confrontation of ideologies to a greater degree occurs in dialogs, but not in turns of story. (Behavior of Miach in the end is rather non explainable.)
«Harmony», actually, is a book about what price you should pay to achieve harmony in the world and whether it is necessary at all if the price is too high.
Автор: Ray Garraty на 6:44 PM