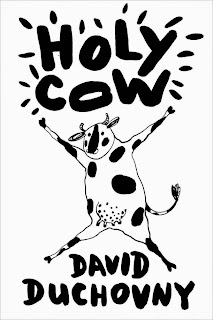 Cow Elsie lives on a farm among other cows. She “can think, feel, and joke”, gets milked by her owner’s sons. She’s not dumb, she knows Homer and Internet jokes. This memoirs Elsie writes for NYC publishing house editor, keeping in mind possible movie adaptation.

Elsie knows the main principles of life, both human and animal’s. But there are a few moments she doesn’t know. For example, why her mom “disappeared one day, like all cow moms do. We’re taught to accept that. That a mom is not forever and it doesn’t mean she doesn’t love you if she leaves without saying goodbye once the job of raising you from a calf is done.” Elsie doesn’t know where her mom had gone. Elsie has a “bff”, Mallory, “Mallory is seriously gorgeous, like she could definitely model. She could be the cow on the milk carton.” Elsie and Mallory keep an eye on young bulls, which are kept in a different paddock. Then two cows case a plan: when two owner’s sons will forget to lock the gate, the cows will use this to escape their paddock and at nighttime join young bulls and play with them. Thus adventures will start.

David Duchovny has joined the already significant number of stars who are not satisfied with Hollywood fame – they want literary fame as well. Actor, director, screenplay writer, musician mounted another top – has written a novel. To my surprise, the result is not bad at all. I’d even say good.

Holy Cow can’t be categorized, as it doesn’t stick to one genre. Duchovny plays in literature: his novel is a parody on Madame Bovary (the novel’s protagonist and the heroine of Flaubert’s novel share the name), a postmodern fairy tale, a fantasy screenplay (a number of dialogues in the book are presented in a screenplay form), a very funny coming of age novel. Any mysticism is absent here (and that may seem like something strange), unlike plenty of good laughs (there is no shortage of them).

The novel is written in teenage slang, especially its first, “farmer”, part, with jokes, particular kind of words, dialogies a la cartoons with animals like Ice Age and such, and this recklessness of the style suggests that Duchovny had written his book during three nights while he took a bath. And still. The important thing is that the book is written in one uniform style, the novel’s narrator has her own voice, and I can’t say that this book is a potboiler written solely for the money. Even the level of jokes has interesting variety, from toilet or poop jokes to Torah jokes.

Throughout the novel Duchovny (or his protagonist) jokes that this book sooner or later will be adapted to the screen. There is strong chance it will. Nevertheless, the author tirelessly makes fun of Hollywood (and of publishing industry, too), yet the books is so postmodernistically done, that it’s unlikely it will ever find a suitable and talented director who will make a worthy adaptation. This is so _written_ book, that holds for the paper, not adaptable at all.

Duchovny, though the dialogues between Elsie and the editor, translates one more important aspect of the book. What are the audience it was written for? For adults or for young adults? Yes, the books has enough teenage slang, teenagers jokes, the whole plot is rather coming of age. I wouldn’t stick Holy Cow to the YA department. Duchovny sometimes uses not so young adult language, plays with adult reader, he’s open for both categories of readers.

Americans, having this book finished, will cry “holy cow!”. And they are right: holy cow indeed, smart, funny, engaging novel.