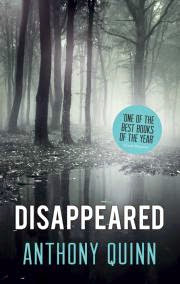 Retired Special Branch agent David Hughes, suffereing from Alzheimer, disappears from his home, where his sister is looking after him. Because the old spy is almost helpless, the police assumes Hughes was kidnapped or even worse. Soon a retired legal clerk is found murdered and tortured under the tree. The victim, Joseph Devin, had a murky past, and his death is somehow connected to the disappearance of Hughes.

The main protagonist of the story, transferred from Belfast to small town in Northern Ireland, Inspector Celcius Daly doesn’t know that. In fact, he even doesn’t realize that both men worked with Special Branch, where Hughes was a detective, and devin was an informer. Daly is assigned to investigate both crimes, he hits many dead ends (no surprise because Special Branch doesn’t want Daly to mess in their business), until he makes a connection, linking Devlin and Hughes to another disappeared man from 1989, Olilver Jordan, who, it’s been said, was an informer for Special Branch while being in IRA.

I expected from Disappeared something more, and after finishing it it became evident to me that behind us is a mediocre thriller, poorly written, poorly structured and not involving at all.
Sentence by sentence, Quinn writes not that bad, for he was a journalist, and he mastered a bit of a craft. Once sentences start to form paragraphs and chapters, the prose become one crumbly bulk barely moving forward. The novel suffers from the need to follow all the rules of modern british crime thriller, and these rules, it seems, are handed out to writers by editors. Here we have a lone sleuth, who returned home, secrets of the past, chapters written from POV of many side characters only making already muddy picture more blurred. Quinn as a slave obediently follows these rules, only as a storyteller he is nothing special, with not enough abilities to pull his novel, relying on clichés and types, through. After promising start with the background of Northern Ireland after the Troubles, the story bogs down, turning into a beaten plot when policeman hunts down the murderer.

Dragging style is complemented with emotional void of the prose. Tragedies of the past and modern political atmosphere in NI as important topics aren’t worked out. Behind us is a mystery, or thriller to be more precise, where not sufferings of soul and analysis of an issue matter but only when the main hero catches the villain.

Disappeared is a poorly structured thriller, it shouldn’t be called a mystery. The final disappoints, first, because instead of fiar solution Daly would present, we get unconvincing confessions from the main villain, and second, the villain itself and his motives materializes from the air, so much for the fair play. All motives are motivless, the final reveals plot holes, and the novel leaves a bitter taste in the mouth. Piercing topic of lives in NI after the bombings and killings stopped was trampled to the ground.

I will add the author to my blacklist, where 90% of British thriller writers already are.