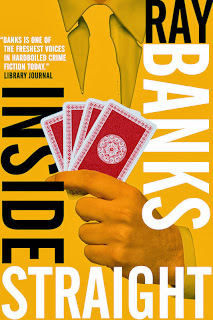 Graham Ellis for a certain offense is transferred from one Manchester’s casino to another one. It is filled with incompetent dealers and lousy managers. Ellis, one might say, is sent to rescue the wretched casino, because he is a responsible, experienced, focused, or at least he thinks so of himself. On day shifts Ellis nearly dies of boredom, until the night manager is attacked and badly beaten. Ellis then is transferred to work at night, where the activity is larger and responsibility too. But for Ellis the show isn’t over. Local crime boss, which is accountable for several casino robberies (though the police can not hang any of them on to him), speaks with Ellis, praising his skills, and then makes an offer he can not refuse.

Ray Banks himself once worked in a casino, so don’t doubt the authenticity of casino detail here. Was Banks the best pit boss at the time, now is not important, but much more important how the author controls his character. Ellis says several times – to himself and out aloud, that he is a professional and master of his craft:

But with the small details we make a true image of the narrator, who, perhaps, is the best in the casino, but as a person he is still an asshole. Banks is an asshole, too, because he forces the reader to root for the main character, despite - with each chapter more and more - the deformity of Ellis’ soul.

Inside Straight is a remarkably old-fashioned by today's standards thing. If the background is "updated" up to the present, then the rest - from the protagonist’s squeamishness to the ending – is vintage, but not covered in dust.

Those familiar with the works of Banks invariably will recognize the essence of the main character, which is almost the same in all the books of this writer. This is a short-tempered, somewhat naive, lad, faint-hearted, but good in the heart. Ellis of this novel in addition is a geek, recording TV shows on the VCR and collecting the figurines and posters.

Only in one scene Banks loses control of his character: a teetotal Ellis gets drunk and calls a colleague, and it is likely that Ellis would have felt that he was drunk, but Banks misses it.