A House in Naples 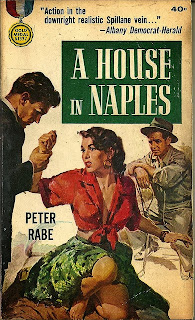 Peter Rabe
A House in Naples

Charley and Joe are two American deserters that during World War II escaped from the army. They remained in Italy, have engaged in the transportation of goods from the black market and generally well settled there. Only Joe, though stupid one, made homself new documents, and Charley didn’t. So when the police stopped his truck, Charlie fled, but with a wound and the face now known to all carabinieri. Now, if he is caught, he will go staright to prison (or noose), and Charley urgently needs to get new documents.

Rabe with each novel increasingly shows his passion for travel. In his first novel, the action took place in the United States, in the second Italy flashed somewhere in the background, the half of the action of the third has been placed in Germany, and the fourth is purely Italian. The protagonist is always a crook, smart and savvy to a degree, but again, short-tempered and jealous. Rabe gave his character an unusual habit: he does not drink, but all the time sucks aspirin.

All elements of the previous work of the writer are again present, but A House in Naples is a more private story. This novel is a kind of rural noir, as Rabe understands it.