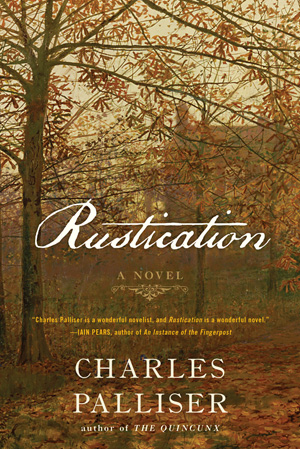 Rustication is written in the form of a diary that a seventeen year old protagonist of the novel Richard Shenstone had written for a several weeks. He was expelled from the university and forced to return home to his mother and sister. However, not much left of home: in the four months that Richard was studying, his father died of a heart attack, and Richard had not even been invited to the funeral, his mother and sister Effie had lost their means of livelihood and moved to a dilapidated house in the south of England.

Richard arrives before Christmas of 1863, alone, without a cart that will come later, but his mother and sister do not welcome the return of the young man. In the novel, with each diary entry the amount of mysteries and oddities is growing exponentially and they are all important elements of the puzzle, and it is not possible to mention them all.

Richard hides the events that occurred to him at the university, and his mother and sister hide the events that took place during his absence. Richard notes that Effie, a little older than him, goes somewhere by nights, and his mother turns a blind eye to it. The mother is holding a secret of her husband's death: why now is the family forced to live in poverty, without any support? Richard gradually reveals secrets about himself to his family and learns the secrets of his relatives.

What a puzzling story this Rustication - and a first-class mystery, and a disturbing neo-Victorian novel. From the first chapter and almost to the very end Palliser throws and throws the puzzles to the reader. Avalanche of oddities rushes at you without stopping. Everyone has something to hide, and the farther the worse. Small sins overshadow the big sins, and that’s what almost all the characters are trying to hide.

Palliser's novel has combined the classic mystery and neo-noir. There are mysterious letters, maniac, murder, family secrets: something will be false clues, but something will work in the final. In any case, the author has played a fair game. At the same time, Palliser significantly updated the classic detective story. Sex, violence, cruelty – that is all here. Noose is tightening around the narrator’s throat, and we sympathize with him, despite his weaknesses and sins. Respectable ladies, earles, teachers, young brides and students - the author turns the established images upside down. Every character is a fallen creature.

Palliser updated the language of Victorian prose as well. There are almost no tedious passages, but the dirty letters are here in full. In addition to that, there are also fragments of the diary, that Richard encrypted (they are written in Greek), where he describes his sexual fantasies. These letters do not shock.

It is an exciting novel, with an amicable confusing plot, presenting a new look at the XIX century England.