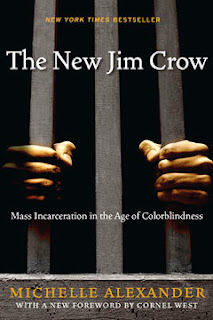 Every once in a while comes a book that says some things obvious to everyone out loud. Sometimes even obvious things should be said out loud. But the thing with this books is that everything written inside it is not obvious and said out loud these things will open someone’s eyes.

Indeed, The New Jim Crow starts with the premise that sounds more like a conspiracy theory than a solid social theory written by a legal scholar and civil rights lawyer. Inside America exists caste system, where an undercaste is black and brown people of America. Instead of slavery and racial segregation, Americans now have a caste system, that is quite legal. Instead of Jim Crow, America now has New Jim Crow.

Living outside of US, I can only judge the American social system by that information US media supplies us. Imagery presented by media mostly shows a safe and comfortable life for whites and not so rosy life for blacks. But, as media hastens to explain, it is only so because blacks themselves chose this life, chose criminal path. Til this day we read and watch “horror stories” about black men, their drug usage and their violence.

Yet this image has no similarities with the image of America presented in this book. If even for Americans it will be a shock to learn about the real state of things, then what about us, on the other side of the pond? It seems like everything starts with the image. No matter how things stand, the only that matters is how they are presented. Michelle Alexander, step by step, paints a bleak picture. After the WWII African Americans, it seemed, received their freedom and civil rights, finally. Yet it was only a start, a beginning of the end. In the new era where an image dominates it was very important to create needed image. After that, this image will start working without additional efforts. People holding power in a matter of decades created that image, of a black man who is a threat, who is an animal, who is a merely life form, not a proper human being. With racism successfully remained in the past (or so they said), it was only with the new image government could control the masses and win the minds of those who were in doubt.

And the image has been sold, successfully. African Americans remained the same, yet he was labeled a criminal. Not only labeled, first he (as the author focuses on males on her book) was made a criminal, then labeled, as an animal, and then excluded from society.

Alexander explains on all the levels how the government succeeded. First the courts, then public image, then war on drugs, then mass incarceration, then ghettos, then total exclusion from American society, discarded as trash. The author makes strong arguments, especially on war on drugs and legal system, and it is difficult to imagine one who would not be persuaded by these arguments. It is always easier to control a large layer of people when this group of people are rounded up and sent to ghettos or, worse, to prisons.

When a large part of African Americans is in prisons or in ghettos stripped of basic rights and privileges, how could we say that USA is a democratic society? When governments makes its own citizens mere life forms, how can we say that it is a democracy? Democracy is based on equality for all, not for those chosen selectively.

The New Jim Crow is a truly eye-opening book. It changes your views on today’s America and African Americans.