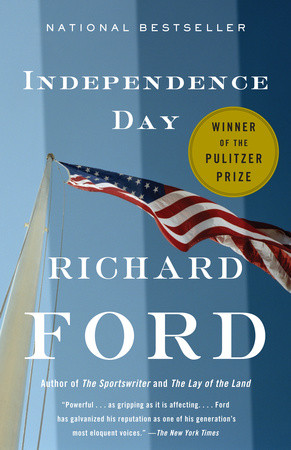 Frank Bascombe, the hero of the first book of the trilogy, returns in «Independence Day». Once a sports columnist and writer, he is now a realty agent, owner of three houses in Haddam, New Jersey, divorced and wants his eldest son Paul to live with him.

Paul is 15, he has some mental problems: he still has not recovered from the death of his brother. Paul barks like a dog, not sociable and tried to steal three packs of condoms from the shop, was arrested, had resisted arrest, and now awaits trial. Independence Day is approaching, and Frank plans to take his son with him on a trip to the basketball and baseball halls of fame and on the way to talk with his son and sort out his problems.

But before the start of the weekend, Frank has to solve several problems in Haddam, sell the house to an elderly couple from Vermont and check on hot dog stand, of which he is co-owner.

Frank Bascombe is a storyteller with a truly bloated ego. He is not part of the world, and in fact he’s the creator. For each topic, the narrator has his own opinion that he sees no reason to not share with you. Largely of of such considerations, and this vast novel consists. Frank Bascombe, as one can say, sits on the reader’s ear, you can not break away from his monologue. Ordinary things in the mouth of the narrator becomes extraordinary. Parade in honor of the holiday becomes a reason to speculate about the independence, car ride with the breeze through the state leads to thoughts about the state of small cities and residential areas, his own book, found on the shelf in café, will remind of the old days as a writer.

Ford gave his protagonist a perofession of a realty agent as a symbol of truly American profession. Bascombe sees in this kind of activity nothing distinctive: he in fact does not sell the houses, but only drives people around. People buy houses themselves. This almost freelance profession can free up time for the protagonist: he is free, communicates with people, hears and sees, keeps his nose to the wind - what he has to do, if not comment on life, his own and in general?

Of course, Ford doesn’t deprive us from sneacking into realtor’s kitchen. Although the details are not quite relevant (the action takes place in 1988).

The narrative here is floating aimlessly, geared for small events, usually quite humorous. Black old woman calls the police; Frank and the seller of the hot dog stand discuss the purchase of weapons; Frank flirts with a female chef; robbery and murder at a motel where Frank stops at night; Paul and even injury is described not so much as a tragedy as ironically - now ex-wife for sure will not let my son to live with me. The novel, like life, does not offer a coherent plot.

Ford’s skills of working at the macro and micro levels should be admired. He can talk about the state of real estate in the U.S., but at the same time, with interest can build a whole philosophy around a menu in cafe. One of Ford’s qualities is he knows how to say with the words that, in general, has no verbal equivalent.

Dialogues here also are deep and live, from jokes with his son to tough negotiations with former wife.

The novel is certainly not perfect: after the incident with Paul it loses some tension. The narrative becomes more viscous, the more that all the main points has been said, but you need to listent till the end.

Several plot points, in turn, are not justified. The murder of Bascombe’s colleague and former lover remains unsolved. Shooting at the motel also remains only the reason for conversation with the protagonist witness. But it can also be attributed to the unpredictability of life, something fires, and something don’t.

But it is always interesting to hear a great writer.