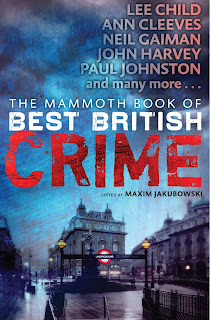 Two years ago, I wrote about one of the previous anthologies titled «Best British Crime». Then that anthology had an enormous size and a dozen of excellent short stories (out of forty). In two years, serious conceptual changes have not taken place: the editor Jakubowski again selected the best and not so from the British crime, diluting the big names with lesser known and quite unknown. The quantity of truly best has not increased yet. This anthology has to offer a dozen stories of exceptional quality, five stories that are not bad, but they don’t deserve a higher praise.

Jakubowski, an experienced editor, as no one understands one of the main rules of this kind of collections: you have to start and finish a book with the strongest stories. Miss it with the opening story, and the reader will put the book down for a long time (if not forever). Miss it with closing stories (after a number of very bad ones) , and the book will leave a bad aftertaste. What's good is that the rule here is met. Anthology opens with Lee Child’s «The Bone-Headed League», noirish delightful story, only pretending to be a lightweight joke. Not surprisingly, Child is called the master. It turns out that he is the master of short form as well.

The next portion is worse. After a cheerful start the anthology falls into a swamp of mediocre short stories, some of which deserve to be collected in the collection «Worst British Crime». But closer to the equator the collection becomes more smooth, mediocre stories are replaced by good and sometimes even great, like «Stardust» Phil Lovesey or «The Message» Margaret Murphy, or the bitter story of Peter Turnbull «The Man Who Took Off His Hat to The Driver of the Train».

On the territory of noir in the book several writers walk into, among them Nina Allan, Cath Staincliffe, Christine Poulson and Stella Duffy (please note, it's all ladies). Allan’s story «Wilkolak» is probably the best in this book. It is a grim story of a teenager who wants to be a photographer and begins to follow the man which very much looks like a serial killer murdering children. Allan does not add anything new to the plots about a maniac who kills children, but switches to a psychological game between the boy and the suspect, a photographer himself in the past. For teenager the killer is kind of werewolf, hence the Polish word of the story in the title. With a serial killer plays the heroine of another story, «Laptop» by Cath Staincliffe. The heroine of the story is a professional thief who specializes in laptops, until one day she steals the laptop belonging to a serial killer. If Staincliffe better wrote the diary part of the story, her short story would be even more shocking.

Among men, strong stories here from such masters as Joel Lane, Adrian McKinty, John Harvey and a new name for me Bernie Crosthwaite with yet another story about a serial killer.

Closing the collection are two fantastic stories, but with the criminal element. This is another feature of the anthology. Among my favorite stories - seven one way or another can be attributed to the fantastic genre - stories from Child, Johnston, Lane, Allan, Lovesey, and the final stories by Alison Littlewood and Neil Gaiman. Gaiman here is represented with the story about the death of Mycroft Holmes, and Littlewood with a shocking prison story.

The collection certainly should be cut by half, and then it would show the British crime from the best side. Moreover, that the fair sex seems to write even more darker fiction than men.