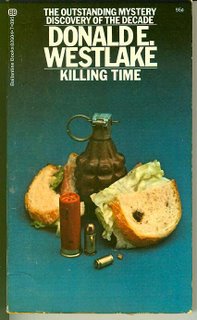 Tim Smith is a private detective, working in the small town of Winston. Moreover, Smith is the only private detective in this twon. At the beginning of the novel, he is sitting in a bar, drinking coffee, minding his own bussiness, when a man enters a bar and tries to shoot Smith. The PI disarms the attacker and calls the cops, and as the police are going to lock an unknown man up, someone with a rifle from a distance is killing hapless attacker.

The deceased is a hitman from New York, and Smith concludes that someone wanted to remove him very much. This is not surprising: Smith works for the City Hall and knows about everything that is going on in the town, has incriminating files on everyone and stores these files in a safe in his office with the alarm. While working in Winston Smith has collected lot of dirt on corrupt politicians and greedy businessmen, rotten cops and bribing citizens, but Smith himself is in dirt.

A reform group comes to the town which is cleansing state towns of corruption in the government, and Smith quickly connects attempt on his life with the advent of a new political force in town. Attempts on Smith’s life will continue, and he is not sure who to trust, but he knows that he must find a villain, until he killed the only private eye of Winston.

«Killing Time» is Westlake's second novel, and it is assumed that this is a kind of homage to the novel «Red Harvest» by Hammett. Both of them are really written in the hard-boiled style, and both are told in the first-person from the point of view of a private investigator. There are the differences between them, of course, this is not a remake, not rewriting of the classics. In the Hammett's novel (written forty years earlier) unnamed Continental Op was a stranger in the town, where he had been sent to by the detective agency. In the Westlake’s novel Smith knows every dog Winston and every dog knows him. At the same time, Smith is not exactly a private investigator in the classic term. He’s not being hired by clients, he is on City Hall’s payrol, he is a fixer who solves its problems, while fat Hammett’s PI works for a detective agency, and we have repeatedly seen how he was hired and how he took up his clients' cases.

In this novel, as always, the plot will have a few twists and turns, but the investigation part of «Killing Time» is inferior than in «The Cutie», and two subsequent novels of the writer (not to mention the Hammett). Much more Westlake succeeded in creating the main character, who does not understand how far he fell, thinking of himself as an honest and perfect man who lives in an imperfect world.

The end is a killer, and the book itself breathes despair. Damn good.
Автор: Ray Garraty на 4:49 PM