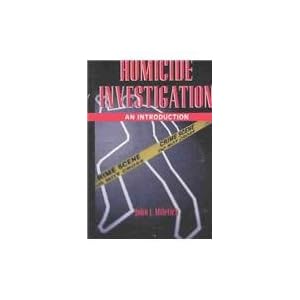 David Simon
Homicide
A Year on the Killing Streets

Popular culture strongly altered our perception of the police murder investigation. Since the 50s of last century in fair amount of output TV police dramas appear on the television screens. Films about homicide investigative work appeared even earlier. It is now difficult to find someone who was not even superficially familiar with the work of a police detective. Awareness of a person in homicide investigation seriously affects the reading of books, in the center of which is murder, whether it is fiction or nonfiction.

Anyone who watched not even “CSI”, but something more pop, is unlikely to be interested in the «Homicide Investigation» by John Miletich. The book seems to written for those who live in a parallel world, and never have seen a murder investigation on the screens of the TV or in theaters. Here Miletich writes a whole chapter about collecting evidence, and we already know about it in some detail. Here Miletich describes the types of weapons, and there is nothing new for us. And there Miletich writes how detectives cope with the daily violence in their work. Anyone who watched the high-quality TV shows about city homicide already knows about it.

Miletich too dry expounds the familiar facts, repeating what has long been wound into our heads. At the same time when the author comes to something not too well-known for the mass culture products consumers, it still is not very interesting. The book, however, is not completely useless. Miletich gives an interesting statistic, but the most exciting chapters foresight is at the top of the book - chapters about the murders in the criminal world. Hired killers, open contracts, the destruction of evidence, the destruction of the body etc - not that it had been a secret, but to read once again spread out on the pages this information is always useful.

Plenty of examples save the book, illustrating the dry theory. Miletich tried and strewn the book with detailing all sorts of murder and subsequent investigation, not often successful.

Can you become a homicide investigator after reading this book? I doubt it. When you wait too long that Miletic now will reveal the secret initiation into a detective, the book suddenly ends, leaving us high and dry.

«Homicide» by Simon is quite opposite of «Homicide Investigation». «Homicide» reads like a novel. David Simon has packed into his book so much that it can be enough for twenty novels. However, we face only one book, of a thickness of 600-odd pages. But this is the case with thick books when you’re enjoying all 600 pages, and then you want another 600, and then another 800. You really live with this book. It read slowly, so that you’re living one year in the deadly streets.

Moreover, «Homicide» is a book the least about the homicide, but it is about everything else. About «Homicide» it is impossible to say what it is about. About whom as well. About the lieutenants, sergeants and homicide detectives? Yes. Or about the dead yos, murdered children, the stupid or merciless killers? And about them, too.

Reading this book, you ask yourself the question: where is Simon? Was he that entire year invisible, was he a ghost wandering in the department and collecting information? How does he know all the details, because he's never got in the frame of his own camera? Epilogue provides an answer to these questions, but it's still a phenomenal job. So much to merge with the department and still remain an observer.

«Homicide» is a unique book, but despite this, you’re still dreaming about something like this to become a yearbook: «Homicide '89», «Homicide '97», «Homicide '2012». For the past two weeks that have passed, as I finished reading the book, every day I keep hearing how bodies fall on the pavement. Incredible.
Автор: Ray Garraty на 8:29 PM