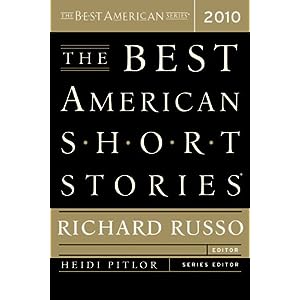 Guest editor of the new book in well-established series of «The Best American Short Stories» became Richard Russo. And if this year has turned out, whether Rousseau has made such a choice of the already-selected stories, but in the book there is not purely stylistic works. The editors have opted for Story.

I can not say that the stories selected are only with a plot, but in all of them there is well-told story, while the book does not include the stories of so-called genre writers (although there are a couple of science fiction stories here, but they are the representatives of McSweeney's).

The anthology truly lives up to its name: all included in it stories are worth reading, and few of them - admiration.

The collection opens with stories by Steve Almond and Marlin Barton. They at first seem very strong, but once you get to the middle of the book, one realizes that they are not so stand-out: Almond’s story of relations between the two card players, a doctor and a patient, seems a bit artificial, and Barton lacks stylistic depth. Much more powerful looks «The Cousins» by Charles Baxter, and it is, probably, the best story in the book. The story is told from the face of one of the brothers (they are not very similar to each other), and with that Baxter acted very advantageous. The image of himself that the elder brother makes in his own words, in the end is not the same image which it is seen by the others. «Safari» by Jennifer Egan is also a family history, but with more exotic entourage. «Safari» is a more complex story, Egan passes narrative needle through the present and the future of heroes of the story, the father and his two children. Egan's prose here is the melting air, wild and dangerous animals; intoxicate style.

The old man Arty Groys, the meaning of his life had been returned by the young prostitute, is memorable hero of the story by Joshua Ferris «The Valetudinarian». Perhaps the author of this story was too straightforward, not so many tasty details in the story. Had the author more sense of humor, this story would have become a burlesque story. Unusual twist with usual components (husband owns repair shop, he can not longer repair engines, as before, while his wife sleeps with the youngster, who works in this shop; youngster, in fact, is the protagonist of the story) is using by Wayne Harrison in his «Least Resistance». The author has vigorous style, it perfectly matches to the story of how everything is always possible to fix. Rebecca Makkai in «Painted Ocean, Painted Ship» managed to turn usual plot about how a university professor is unjustly condemn for misunderstood words and deeds, in a vivid story, painted colors of love, confusion and sadness. Kevin Moffett played with narrative in «Further Interpretations of Real-Life Events». The narrator writes the story, his father writes the story, and the narrator quotes the six rules of storytelling, which narrator was taught once by his mentor at the university. The comic, laminating one layer of narrative on another, story about fathers and children. The story of Tea Obreht «The Laugh» is with a touch of the supernatural.
The most laughable story in the book is «All Boy» by Lori Ostlund. In it eleven-year-boy lives with his parents on the verge of divorce, likes to read and to his 11 years knows a lot of unusual words for a child of his age. Sarcastic «Raw Water» completes this collection. Wells Tower wrote a satire on the well-fed society, and yes, it's fantastic (and science-fictional a bit)!

Not all stories are equally good: some are overly sentimental; some are like scenarios of a mediocre Sundance movie.