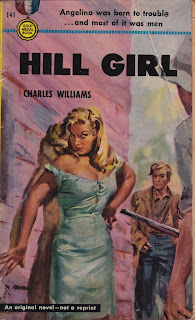 A part of Forgotten Books Friday

Bob Crane after college comes back home to the farm inherited from his late grandfather. Bob’s father nicknamed the Major did not leave the youngest son a cent , but had written everything to his oldest, Lee. While Bob was away, Lee married a patient girl whom he had known since high school, though hadn’t started to do something serious with his life. He remained the same drunkard and womanizer like he had always been. Family life hadn’t brought him to reason.

Soon after meeting after a long separation, the brothers immediately make a journey to the farm of a local hunter Sam, who moonshines selling whiskey under the counter. Buy a jar of whiskey is just an excuse to go to Sam's house. He has an older daughter, Angelina, who the farmer hides from the men's eyes better than his whiskey from the eyes of the sheriff .

«So this was Angelina. This was the scrawny little girl with the thin arms and legs and chapped knees and the wide, frightened brown eyes I remembered. I felt myself growing uncomfortable and tried to take my eyes off her.

It wasn't that she had grown so much. She wasn't big, even now. But it was as if she had received twenty-five pounds or so in the mail with instructions to put it on where she thought she needed it most.»

Lee has already heard about the 18-year-old angel, who lives as in prison, and intends to do more than just stare at her. Younger brother warns him than nothing good will come out from the affair with the hill girl, but the older brother isn’t listening. And nothing good really will come.

The debut novel by Charles Williams is a successful blend of noir fiction and the Southern fiction. After the first visit to the farm to Angelina and her father it becomes clear where things will go, and you should only watch as Williams is unfolding this play in rural scenery. Bob Crane is hardly a typical noir hero: he's not very good-looking, large, sharp-tongued, but with a bright head on his shoulders and a clear conscience. And it is his rackety brother, who will only brings problems and try to drag the protagonist to the bottom.

Details of the novel, I should say, are a little dated: several plot twists are entirely of this kind that another five years, and the whole structure of the novel would have ceased to have sense at all. But this should not be an obstacle to get the pleasure out of reading this book.